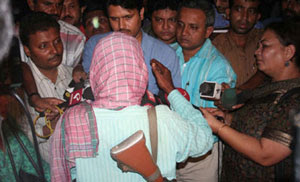 A wily fox has many exits to his lair. So also with Koteswara Rao alias Kishenji, national chief of the People’s Liberation Army and politburo member of the CPI (Maoist). Media-savvy, he often speaks to the press, but on his own terms. His call would come out of the blue and he would hang up immediately after giving his sound bite. Long phone calls, he knows, will give away his location.

But in an interview with THE WEEK, Kishenji spoke at length on a wide range of issues, including Telangana, Kashmir and the northeast. Excerpts:

What is your response to the decision to form Telangana?

The demand for Telangana is very old and we support it. Though Delhi has announced its intention to form Telangana, I doubt their sincerity. Many rich and powerful Telugus have illegal land in Hyderabad and have invested millions there. There are powerful people in the UPA who are linked to these vested interests. They will create roadblocks.

But will a separate state help? Jhar-khand’s tribal leaders are as corrupt as those who ran Bihar.

Creation of Jharkhand was the first step towards fulfilling aspirations of tribals who were neglected in Bihar. It will not solve all problems, but it is the first victory. Now they will have to fight corruption within their society. It is because tribal leaders like Shibu Soren and Madhu Koda betrayed them that tribals have turned to us. But the fight for a separate state where they are masters of their destiny is the first step of revolutionary mobilisation for deprived people.

So you would also support the Gorkhaland movement?

Of course. In fact, the undivided Communist Party, the old CPI, had called for this soon after Independence. The demand first came from CPI legislator Ratanlal Brahmin, a leader of the hill people. There is a CPI resolution supporting the demand for a Gorkha state. The CPI(M) emerged from the CPI, but they are now pandering to Bengali chauvinism.

And strangely, there is no difference between [Congress leader]Pranab Mukherjee, [Trinamool Congress chief] Mamata Banerjee and [West Bengal Chief Minister] Buddhadeb Bhattacharjee. They are all trying to capitalise on the Bengali sentiment against a division. This is cheap politics. These politicians have done nothing for the people of West Bengal, but now want to divide the Nepalis and Bengalis. We want the poor on both sides to maintain their unity and foil evil designs of bourgeois politicians.

Will the Gorkhas get a separate state?

Not by going on hunger strikes and tripartite talks. These methods do not get you anywhere in India. You have to fight.

An armed fight? But Telangana came out of hunger strikes.

Telangana is still a long way off. We Maoists believe in a combination of armed struggle and mass mobilisation. After all, Telangana or Gorkhaland are not separatist demands. They want to remain in India.

But your party has also supported separatism. The CPI (Maoist) has an agreement with the People’s Liberation Army of Manipur. Your party supports the Manipuris’ right to self-determination.

That is not supporting separation! The people of the northeast and Kashmir have a right to self-determination and we wholeheartedly support their struggle for it. Theirs is a just demand and we want to tell them that the struggling poor of India are with them in their fight against the exploitative Indian state.

But self-determination only means that they can decide if they want to stay in India or become independent. We are against India imposing itself on these people who have developed independently for a long time.

Our understanding with the Revolutionary People's Front of Manipur [PLA is its military wing] is based on our recognition of Manipur’s right to self-determination and their commitment not to attack the Indian proletariat. That is the first step towards a revolutionary front of the struggling people of India and of Manipur.

ULFA attacks poor Biharis in Assam, despite your talking to them.

We unconditionally support ULFA’s struggle for self-determination in Assam. We only want them to stop attacking the Indian proletariat. We will continue to engage with ULFA on this issue.

The PLA has traditionally accepted its commitment to the Indian revolution, but ULFA has never agreed to carry that ideological baggage. They talk of building socialism on a nationalist base
.
ULFA cannot ignore the revolutionary struggle of Indians and our enormous goodwill for their struggle. It has gained nothing by trusting neighbouring countries like Bhutan and Bangladesh, where puppet governments of India rule. They have betrayed ULFA under Indian pressure or when it suited them. Look how many ULFA leaders have been handed over by Bangladesh in recent weeks. ULFA cannot trust these governments. They have to trust us.

But don’t you see the tendency of many of these ethnic armed movements to get co-opted by the Indian state?

I know what you are talking about. We are not dealing with movements which have made deals with India or are ready to do so. ULFA is still fighting, despite many reverses. ULFA chairman Arabinda Rajkhowa was handed over to India, but Home Secretary G.K. Pillai lied that he had surrendered. Typical Indian divide-and-rule policy. They want Rajkhowa and ULFA’s military chief Paresh Barua to fight.

Have you ever discussed these issues with Barua? He is the one who orders attacks on Biharis in Assam, isn’t he?

We have engaged with him. I met him under the party name of Pradip, that is my identity for him. He does not know me as Koteswara Rao or Kishenji. I wish to speak to him again. I sincerely want ULFA, the PLA and other such groups fighting for separate homelands or for self-determination to fight the exploitative Indian state alongside us.

We do not want to impose the model of our struggle on them, as they know how to fight best under their own circumstances. But we want them to attack the enemies of the people, and not the poor, wherever they come from.

Are you not being ambitious? The Burmese Communist Party tried to rope in ethnic separatist movements like the Kachins and Karens into their fold but failed because the Wa and Kokang tribes, who formed the majority of their armed soldiers, deserted.
We do not want to bring any of these self-determination struggles into our fold. We do not want to absorb them. We respect the right to self-determination. But they must realise we have a common enemy—the oppressive government in Delhi. They cannot fight Delhi alone.

So you are supporting them for tactical reasons?

Not at all. We want them to be part of a broad front so that we can co-ordinate our struggles. But this should be based on sound politics, not mere tactics. So we have come out in political support for the movements of self-determination. We now want to unite their struggles with the nationality movements. This is the next stage of the Indian revolution.

You support Kashmir’s right of self-determination?

We do. But only if it is a genuine struggle. If Kashmir wants independence, so be it. But that should cover the whole of Kashmir. We have no patience for religious radicalism. If the Taliban attacks India, we will be the first to fight them. But we cannot deny Kashmir’s aspirations for self-determination. That is a secular aspiration focused on Kashmiriyat, not a Taliban-style religious fanaticism.
Posted by nickglais on 1/10/2010 08:39:00 AM