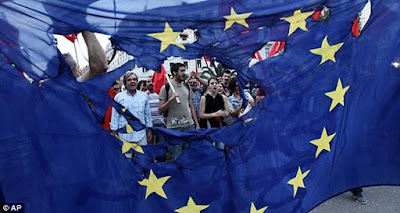 The European elections do not belong to the peoples!

They belong to the multinationals and the imperialists!

Abstention and denunciation of the European Union!

The European Parliament election in May will be held at a time when the reactionary nature and role of the European Union (EU) are fully exposed.

The EU operates under the law of the mighty; the powerful imperialist states and monopolies rule and impose their policies and interests.

Throughout the years of the capitalist crisis, the EU reinforced barbaric policies against the working class and the peoples, aiming at retaining and increasing the profits of multinationals, capitalists, bankers, and monopoly groups.

They promoted a storm of anti-labor measures, drastically reduced labor wages, attacked trade unions and the right to strike, set back by decades the rights and the living standards of the working class and the peoples. This was the case in all EU member-states.

Unemployment, marginalization and poverty, not only in the south but also in the north of Europe, hit millions of toilers and young people. Social benefits were reduced or abolished, public enterprises were taken over by capitalists, and parts of the middle classes drowned financially.

The EU and the capitalists that rule over it have transformed societies into jungles of exploitation, competition, and historical regression. The long and fierce struggle of the French people and toilers against Macron’s austerity measures and murderous repression is strong proof of this.

The immediate payment of the repairs in Notre Dame is one more proof of the outrageous hypocrisy of the bourgeoisie who’s overflowed with wealth and at the same time forces austerity measures against the working class and the masses of France.

Due to these anti-social policies, the reactionary, racist, nationalist, and fascist forces have been reinforced in all EU member-states.

These forces are not opposing the capitalists and imperialists, albeit they so present themselves. They are propagandists and supporters of extreme anti-labor policies and the push of public life towards fascism.

They express the most extreme forces of capitalism, exploitation, and social, ethnic, religious, cultural, and gender discrimination. They are the forces that pave the way to war and the slaughter of toilers and peoples of Europe.

The EU is a reactionary construction of the capitalist-imperialist elites, which is historically doomed to fail. It is a reactionary alliance with internal contradictions and deadlocks. The developments around Brexit confirm this assumption.

The EU resembles a laboratory aiming to design policies against the toilers and the peoples and plundering of the wealth that the toilers and peoples of the dependent and neo-colonial countries are producing. It is a new "sacred alliance" against the working class, the social resistance movements, the migration flows, and peoples' struggles for national and social liberation.

The EU has a leading role, together with, but at the same time discretely from, the US and other imperialist countries, in defending the global power of the capital and the multinationals. It supports imperialist economic and military interventions and loots the semi-colonial and dependent countries of their natural and human wealth.

Only in the recent years they directly and actively -or indirectly- supported military interventions in Libya, Mali and Central African Republic.

They stirred up the civil war in Syria and led the escalation of the internal crisis, bloodshed, and the risks of separation in Ukraine. They support the imperialist campaign against the people of Venezuela, they participate in the illegal economic sanctions and reinforce the anti-constitutional initiatives of the opposition.

They actively support the so-called anti-terrorist campaign by collaborating with the US imperialists against the liberating and revolutionary peoples’ movements. They adopt tough anti-immigration policies, they build legislative and practical barriers and walls against desperate migrants and refugees and they are responsible for thousands of deaths at the borders.

They promote anticommunist hysteria and, with their policies, they reinforce the revival of racism, fascism and Nazi gangs. They push for the adoption of tough measures to suppress and reduce democratic rights.

The European Parliament -and the direct general election in the EU member-states- is a well-planned project to build a democratic facade for this reactionary alliance of European bourgeoisie.

It is a tool of disorientation of people and workers’ resistance movements. It is an institution of ratification of the reactionary policies of the European Commission, the European Council and the Council of the EU.

It legitimizes policies against the movements of social and ethnic liberation and promotes anti- communism. It is an institution that has been devastated since the very beginning of its existence in the eyes of the European peoples and that is why it faces complete deprecation through the high abstention rates in the European elections.

The so–called European Parliament is a construct of the powerful and not a fulfilled demand of the struggles and movements of the peoples of Europe. All these years of barbarism it has been identified with the policies of the capitalists and imperialists.

It is not just an “elephant cemetery”, some silent, highly paid MPs who only know how to applaud and subscribe; but a body of supporters and propagandists of the rotten capitalist European idea, which has nothing to do with the long–standing demand and need for fraternity and common struggle of the toilers and peoples of Europe. This is a need that can only be served in the struggles to overthrow this barbaric and reactionary alliance of capitalists and imperialists.

Against all of them, against the EU and the governments of the member-states, against the capitalist barbarity and imperialism, the power of the struggling working class and the peoples’ movements must rise again. We fight to strengthen internationalist solidarity and common struggles, we defend the right of the peoples to choose their own path of development and social organization. We support the resistance against the EU policies. We strongly oppose the revival of fascism, racism and neo-Nazism. We stand in favor of the socialist prospect of the peoples and the working class

We who sign this common public announcement, left and communist organizations and parties from European countries, address the toilers, the unemployed, the youth, the immigrants and all the progressive and struggling people and the movements of resistance against capitalist barbarism and imperialism.

We call on them to actively resist the policies of the EU, with the ultimate goal of crushing this imperialist reactionary alliance. We are struggling for the secession-withdrawal of our countries from the EU.

We call for mass boycottage to the farce of the European elections and we are struggling to turn passive action to a massive and militant movement against the EU.

NO TO THE EUROPEAN UNION OF CAPITALISTS AND IMPERIALISTS!

ABSTENTION FROM THE EUROPEAN ELECTIONS!

AGAINST THE ANTILABOR POLICIES OF AUSTERITY AND OF SOCIAL BARBARISM!

Committee for the Construction of the Maoist Communist Party Galicia – Spain

Initiative for the Construction of a revolutionary- Communist Party – Austria