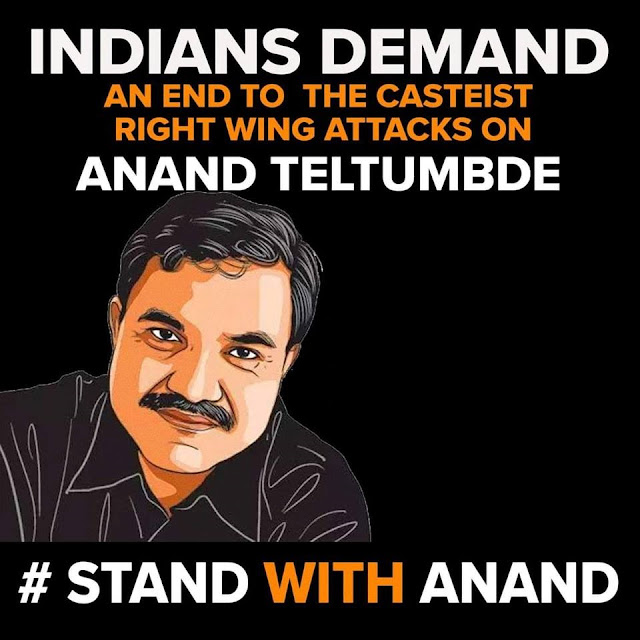 The court terms his arrest by the Pune police in the early hours of Saturday in Mumbai “illegal”.Writer and academic Anand Teltumbde was released by a Pune court after he was produced before it on Saturday afternoon.

The court termed his arrest by the Pune police in the early hours of Saturday in Mumbai “illegal” and observed that the protection granted to him was for four weeks, and that either the Bombay High Court or the Supreme Court would have been the competent authority to take a call on his arrest following the rejection of his anticipatory bail plea.

Mr. Teltumbde was arrested near the domestic terminal of the Chhatrapati Shivaji International Airport in Mumbai as soon as he landed from Kochi. He was first taken to the airport police station, where a diary entry was made, and later to Pune.


Anand Teltumbde was arrested at 3.30 am from Mumbai domestic airport when he was returning to Mumbai from Kochi.

Adv Pradeep Mandhyan spoke to Inspector Indulkar from Pune who was at airport to take him into custody. Indulkar claimed Teltumbde was being arrested since his bail had been rejected by the Pune trial court! This action blatantly violates the Supreme Court order dt.14th January which gave Anand protection from arrest for 4 weeks so that he could approach  the courts for bail.

As per the above SC order Teltumbde could only be arrested after the completion of 4 weeks from the date of the order, unless he could get bail from the lower courts or the High Court. This 4 week period of protection from arrest would expire on 11th February. So his arrest early this morning is a blatant violation of the above order.

Teltumbde came to Mumbai as he was scheduled to file his anticipatory bail petition in the High Court this morning through his advocate, Senior Counsel Mihir Desai.

With deep anguish and mounting concern, we, a worldwide community that reveres democratic values and human rights, urge the United Nations to intervene with the Government of India as a last resort in the immediate withdrawal of the fabricated charges by the Pune police against Dr. Anand Teltumbde, Senior Professor and Chair, Big Data Analytics at the Goa Institute of Management. Dr. Teltumbde’s imminent arrest by the State is one of the severe most human rights violations against freedom of speech and dissent and will set a precedent for suppression of all progressive and intellectual thinkers by the fascist regime.

Dr. Teltumbde is one of India’s leading contemporary public intellectuals and an internationally renowned scholar. He is the longest-standing columnist at the Economic and Political Weekly (one of India’s best-known internationally acclaimed social science journals), General Secretary of the Committee for Protection of Democratic Rights (CPDR), and presidium member of the All India Forum for Right to Education (AIFRTE). Dr. Teltumbde is a prolific writer, with twenty-six books (in English and Marathi) and research articles on data analytics, cybernetics, caste-class and public policy issues. His most recent publications include Republic of Caste and the co-edited anthology The Radical in Ambedkar: Critical Reflections by Penguin Random House. His writings have been translated into several Indian languages.


Over his long career, Dr. Teltumbde has consistently been on the side of social justice, democracy, and the Indian Constitution. His books and articles are taught in universities the world over. He has supported democratic struggles in the country against caste- and religion-based violence as a representative of very large numbers of ordinary people whose voices and hopes he bears. His writings –scholarly, technical, and popular– have been very central to India’s critical thinking. His lengthy resume demonstrates his far-reaching contributions to several fields of academic inquiry, as well as to bringing about progressive social change.

Despite his professional success, which could have meant a luxurious and carefree retirement, Dr Teltumbde has instead contributed his intellect and experience back to our society via teaching, writing and contributing to democracy through people’s movements. Dr. Teltumbde has been invited by organizations/forums worldwide for his scholarship and he has always expressed his views on making India progressive, inclusive and harmonious.

It is preposterous that Dr. Teltumbde is facing imminent arrest under the undemocratic Unlawful Activities (Prevention) Act (UAPA) based on a fabricated case filed by the Pune police in India under which ten other eminent persons, including human rights activists, lawyers, and public intellectuals, are already under arrest. The case relates to the organizing of a peaceful meeting on 31st December, 2017 to commemorate the 200th anniversary of the Last Anglo-Maratha battle, which took place at Bhima-Koregaon, Maharashtra, India, where large numbers of Dalit soldiers were martyred. Justice P. B. Sawant, a retired judge of the Supreme Court, and Justice B. G. Kolse-Patil, an ex-judge of the Bombay High Court, were co-organizers of this event. In point of fact, Dr. Teltumbde was not even present at the event.

Following it, several fabricated letters addressed to a “Comrade Anand” were released by the Pune police as ‘evidence’ for the justification for his arrest. Each of the so-called charges by the Pune police has been refuted with documentary proof by Dr. Teltumbde. Notwithstanding this proof, the false charges have continued in a concerted campaign to intimidate and silence Dr. Teltumbde. As is very well known, under the UAPA, these fabrications are enough to detain Dr. Teltumbde.

We therefore urge the United Nations to engage with the Government of India to immediately withdraw all charges against Dr. Teltumbde and oblige in serving justice and protecting democracy from the perils of tyranny. We appreciate an opportunity to meet yourself and your team in person at your earliest convenience and present our concerns.

Student, staff and faculty of: