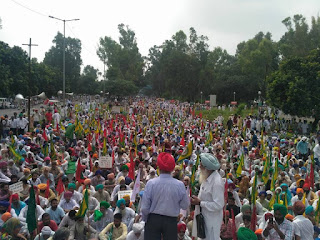 The demonstration of people’s power in Chandigarh for the release of the democratic rights activist and to demand for keeping the rulers’ hands off others has proved to be a demonstration of the healthy characteristics of the people’s movement of the state.

This movement has traversed a long distance from the struggle for the safeguard of the honor and dignity of the daughters to keeping high the flag of the rights of the dalits.

It has also held aloft the flag of class unity by pushing back the divisive and communal moves of the ruling class at very sensitive moments and complex situations.

While on this journey the democratic character of the people’s movement has developed and brightened up.

About nine years ago the qualitatively advanced layers of the people’s movement of the state created a new example of glorious mobilization of the masses by organizing the Democratic Front against Operation Green Hunt against the State’s all out offensive in the adivasi areas.

At that juncture, intellectuals and a large number of the activists of democratic forces and mass movement came together and stood guard against it.

Along with mass mobilization, a number of publications were also brought out for the people of Punjab in order to make the picture of the state’s offensive in those areas clear. A distance of hundreds of miles from those tribal areas could not keep the people’s movement in Punjab away from its democratic and class concerns. This movement of such an effective mass resistance attracted the attention of not only the intellectuals and democratic forces from all over the country but also of the revolutionary forces.

From that time onwards the people’s democratic movement in Punjab has raised its voice against the state repression being perpetrated in far off places. At present also the democratic movement of Punjab, by coming forward in no uncertain terms against the detention and arrests of democratic persons and cases filed against them as a part of the same state repression, has advanced further its glorious traditions. From the day of the police raids till today this activity has remained an inalienable part of all the mass activities despite their engagements in their sectional struggles.

The organizations of different sections of the people reacted immediately by organizing joint actions at the local level. During the very first week of the arrests, demonstrations were organized in about a dozen cities and towns for the release of the intellectuals. Amongst these demonstrations, the one organized in Bathinda by the “Committee against the Oppression on Dalits, Punjab” was especially spectacular. On a call given by CDRO to hold demonstrations on 5 th September on this issue more than a dozen mass organizations participated in large numbers in the protests organized by AFDR.

After that, these activities continued at different levels and in different forms till 13 th September and is still continuing. That dozens of organizations came together with one programme in such a short time span is not in itself a small achievement. The warning given to the rulers to keep their hands off the democratic activists by the working people after having reached the capital from their arenas of class struggle does demarcate the developed democratic character of the people’s movement. In this respect Punjab holds a special place as there still is no information of such a big mass demonstration from any part of the country.

The most important aspect of this demonstration is that it has been held from a clear and demarcatingly distinct position. Along with being democratic, this position is saturated with class concerns also. It is not simply a partial position of looking at the cases being true or false by assessing them within the bounds of only civil liberties, but it pertains to a position taken after relating it with the class concerns.

The mass organizations in Punjab have comprehended this onslaught as a part of the steps comprising this strategic offensive being undertaken under the policies of economic liberalization. It has been clearly understood that any section of society comes within the range of this offensive which is critical of the economic liberalization, oppose it, resists it, stands or speaks against it.

The communal and repressive offensive of the BJP government have been seen as constituting an interconnected strategy and their inter-linkages with the demands and struggles of the working people have also been shown. While exposing the real nature of the other ruling class parties’ claims of saving the democracy, the leaflet issued by the mass organizations has fore-grounded the importance of people’s unity and struggle for democracy.

The large mass mobilization from the standpoint of such a comprehensive position carries a special political significance in the present situation.

This demonstration raises high the flag of fighting unity of the Punjabis with the struggling working
people of the country.

It is also a befitting response to those machinations of the rulers through whichthey are planning to bring the democratic movement of the Punjab within the range of their attack by connecting its activities with the detained activists.

This has proved to be an open declaration by the democratic movement of the people of Punjab that the voices of the democratic persons and activists of Punjab have grown high after being reared in the lap of people’s movements and the resonance of these movements have always been challenging the rulers through these voices. Throwing these voices in the jails amounts to live in an illusion of imprisoning resonating vibrations of people’s movement. The working people of Punjab in response would raise their voices still higher, and it should also be remembered that pro-people intellectuals and democratic activists are not there without the protective umbrella of the people’s movement.

This demonstration, which is a proclamation of mass rebelliousness against the oppressive fascist
offensive of the BJP and the RSS throughout the country,should become a point of consideration for
those deformed forms of thinking which comprehend the body and character of the mass movement
developed out of the specific historical, geographical and political conditions of Punjab as essentially
deficient.

All those sections of the working people were participants in this mass action which are taken to be a
part of the united front conceived to be formed in the process of development of the new democratic
revolution but whose sectional struggles are still at a rudimentary level.

They essentially comprise those sections which have remained and are now a part of the struggle against the present exploitative order.

The raising of a collective voice by all of these sections together against the onslaught of the new economic policies is in itself a significant event for the mass movement in Punjab.

This healthy democratic character of Punjab’s mass movement must become a most precious material for those revolutionaries who are committed to people’s revolution.

Those who have fallen prey to the tendency of belittling it as merely a democratic must understand that it is the genuine and solid democratic character, saturated from within its holistic being, of a movement which enables it to be included in the leading ranks of new democratic revolution.

And it ends as a revolutionary movement after its further development.

The task of developing a general democratic consciousness amongst the working masses in the backward countries can, in reality, be accomplished with the revolutionary framework.

That is why the closer and permanent comrades-in-arm of the democratic activists in these countries are always the revolutionaries.It is our earnest prayer and wish that this democratic character of Punjab’s mass movement remain ingood health and condition,