As US President Donald Trump prepares to announce his administration’s strategy for the stalemate in Afghanistan later on Monday, the South Asian country’s $3 trillion wealth of natural resources has taken the center of attention 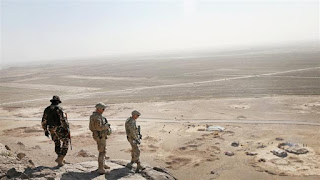 As US President Donald Trump prepares to announce his administration’s strategy for the stalemate in Afghanistan later on Monday, the South Asian country’s $3 trillion wealth of natural resources has taken the center of attention.

While the US Department of Defense’s estimates have put Afghanistan’s untapped wealth of gold, copper, uranium and other rare-earth minerals at well around $1 trillion, Afghan officials’ latest geological studies hint at figures three times larger.

The number can probably explain Washington’s willingness to continue the war in Afghanistan, which has dragged on for 16 years and has cost the US economy more than $714 billion dollars, according to the Pentagon's Special Inspector General for Afghanistan Reconstruction (SIGAR) July report.

The second longest war in the US history has also killed over 2,000 American soldiers and injured 20,000 more.

And now Trump is set to address a problem that vexed his two predecessors.

His administration has been under overwhelming pressure to “turn the tide in Afghanistan,” to borrow Senator John McCain’s words.

Although opinions vary on whether the US president would authorize an increase in US troop levels in Afghanistan, there is a common consensus that the Trump administration is exploring ways to recoup some of the money funneled into the war over the past years.

In fact, the businessman-turned-president has already discussed the possibility with his Afghan counterpart Ashraf Ghani and reportedly views the potential there as a justification for prolonged US military presence.

According to administration sources, the White House is already considering sending an envoy to Afghanistan to meet with mining officials, an opening salvo for harnessing the country’s natural resources.

Afghanistan is also open to the idea, with Afghan government spokesperson Javid Faisal calling it a “win-win” situation.

Interestingly, Trump has been receiving informal advice on Afghanistan from his billionaire friend Andy Feinberg, who owns major US military contractor DynCorp.

The company has been operating in Afghanistan since 2003 and is believed to play a role in securing the country’s mines, according to the New York Times.

US already behind in the race

The US is not alone in seeking a piece of the cake in Afghanistan and has fallen behind countries like China, Germany and Russia who have already taken their first steps.

Australian Prime Minister Malcolm Turnbull says his government is “open” to sending more troops to Afghanistan, as requested by the United States.

China is eyeing Afghanistan’s copper resources and is sending in its Metallurgical Group Corporation (MCC) to extract $100 billion worth of the chemical.

During the Soviet-era, Russia tired to control Afghanistan's natural gas but abandoned the effort after the Taliban’s rise to power.