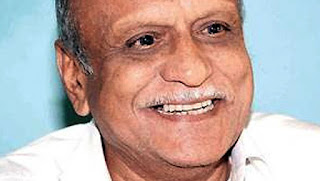 Democracy and Class Struggle hopes that the death of MM Kalburgi will not be in vain and that people in India and the rest of the world will wake up to the lethal danger of Hinduvuta and the attack on progressive thought in India that has been witnessed in recent years.

The climate of terror lies firmly with the Indian State and in particular with Modi the Prime Minister of India whose rise  is the demise of free thought in India.

Leading Indian Progressive intellectual  and former vice-chancellor of the Hampi University, professor MM Kalburgi was shot dead at his residence in Dharwad by an unidentified gunman at around 9am on Sunday.

Like Maharashtra-based rationalist Narendra Dabholkar, who was killed in August 2013, Professor Kalburgi too had his run-ins with right wing Hindutva groups over the years.

"Armed policemen who kept a vigil outside his house were withdrawn around three months ago at the request of the professor," said Nagaraj S Thigadi, the relative who rushed the Kalburgi to the hospital in his car. 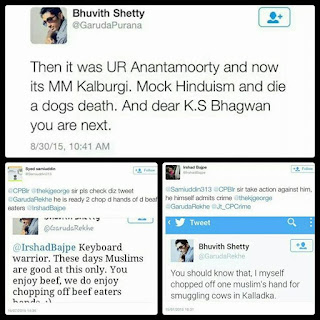 Speaking to HT over phone from Dharwad, Thigadi, who lives next door, said, "A stocky man knocked on his door around 9am. When his wife opened the door, the man asked for the professor. The moment Kalburgi came to the door, the man shot him between his eyes from a close range. He then calmly walked away, got onto a motorbike that was waiting outside and escaped."

In June last year, a case was registered on the basis of a complaint by a Hindutva activist against professor Kalburgi and (now deceased) writer U R Ananthamurthy for hurting religious sentiments.

The case was filed after professor Kalburgi made a public statement on June 9, 2014 where he criticised idol worship by quoting a section from Ananthamurthy's 1996 book 'Bettale Puje Yake Kadadu' - Why offering prayers in the nude is wrong'.

His statements triggered a major row with groups such as the Bajrang Dal, Vishwa Hindu Parishad and Sri Rama Sene holding statewide protests.

"During one such protest outside his house, activists of the Bajrang Dal targeted him with stones and soda bottles," Thigadi said. The Dharwad police has not yet made an official statement about the killing. "We are waiting for the autopsy report," said a senior police officer.

Dr Kalburgi was born in Yaragal village of the erstwhile Bombay Presidency (now Singdi taluk of Bijapur district) of British India to Madivalappa and Guramma. He received primary and high school education from a school in his village and Singdi. He received his Bechelor of Arts degree from a college from a college in Bijapur and Master of Arts in Kannada language from the Karnatak University in 1962.

In 1966, he got promotion in the Kannada department at the university. He also served as a vice-chancellor of the Kannada university, Hampi before retiring from services.