George Galloway's Shame : In Defence of Hugh MacDiarmid and his anti Fascism by Nickglais 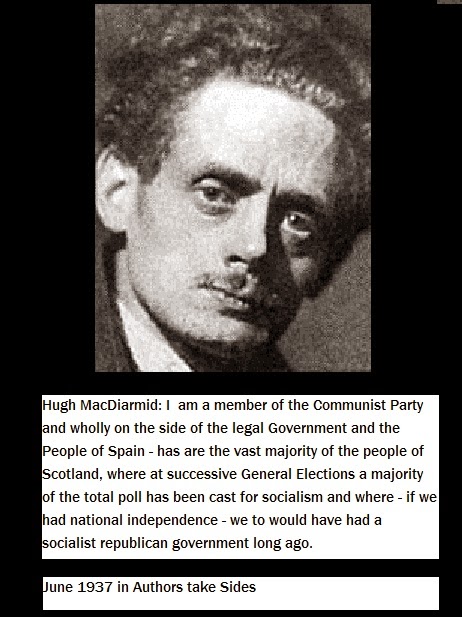 
"When London was burning under the Blitz, their ( Scotland's) poet laureate (Hugh) MacDiarmid said: “London is burning, I don’t care.” They said it was England’s war"

George Galloway, someone who we agree with on many working class anti racist issues, has decided to smear and savage Hugh MacDiarmid ,Scottish Poet and Communist at a meeting bought and paid for by the right wing magazine the Spectator on the 26th June 2014 to advance the Unionist case of the British establishment..

Hugh MacDiarmid, Scottish Communist and one of Scotland's finest poets is dead and cannot answer the slander of his indifference to Fascism and War from beyond the grave - however we at the Aflonyddwch Mawr  have exposed the traitor class of the British Establishment  up until 1940 and their views on Fascism here :

"Indeed early in 1940/late in 1939 prominent member of the British establishment Lord Lloyd of Dolobrian , later a minister in Churchill's war cabinet , wrote a pamphlet entitled 'The British Case' , which explicitly rejected the notion of a war against Fascism ( a concept which later became a necessary part of mobilising the population for Total War after the fall of France ) and this rather than just reflecting Lord Lloyd's viewpoint , had a preface written by the aforementioned Lord Halifax, then Secretary of State for Foreign Affairs. In 'The British Case' Lord Lloyd writes:

"Our most ancient and faithful ally , Portugal , enjoys today greater prosperity than ever before in the modern world under the wise but authoritarian government of senhor Salazar. The government of Poland itself was definitely authoritarian . Above all , the Italian genius has developed , in characteristic Fascist institutions, a highly authoritarian regime which , however , threatens neither religious nor economic freedom , or the security of other European nations." (12a)

It was not Communist Hugh MacDiarmid that was indifferent to Fascism in 1940 but the British State and its establishment that George Galloway now defends by slandering and smearing one of Scotland's true anti Fascist sons while at the same time speaking at a meeting paid for by the Spectator Magazine the voice of  the Lord Halifax's in the 21st century.

George, the Spectator Magazine is not the friend of the working class and our late beloved Poet Hugh MacDiarmid was - your speech has been hailed by the venal British Press has a new height in your oratorical skills  has you insulted and smeared what is good and great in Scotland a poet and a socialist who loved the working class - Hugh MacDiarmid.

PS : George  - Wilson Harris, Editor of the Spectator in 1930's was a supporter of appeasement and the Munich Agreement.

MacDiarmid’s four-page pamphlet, `Scotland; and the Question of a Popular Front Against Fascism and War’, argued publicly for an independent Scotland. 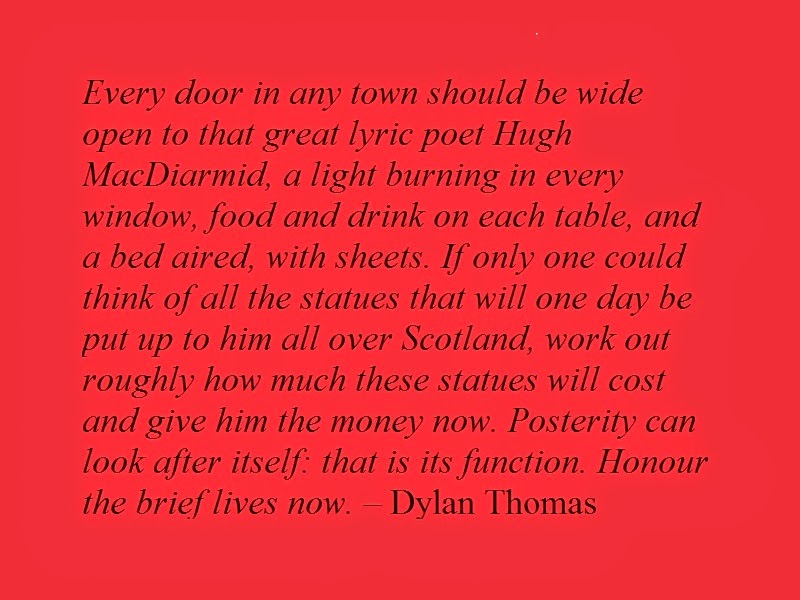 
Hugh MacDiarmid was the pen-name of the poet Christopher Murray Grieve and the name by which he is generally remembered. A declared Communist continuously from the late 1920s, he was actually a member of the Party `only’ from 1934-38 and 1957-78.
As MacDiarmid, he led a Scottish literary revival, aiming to engender cultural self-confidence amongst Scots as apolitical weapon. He adopted the use of a form of Scottish dialect, ‘Lallans’, which was a borrowing from many different way Scots spoke at different times and in different places but his poetry was thoroughly modernistic in form.
Born on 11th August 1892 in Dumfriesshire, he was influenced towards radicalism by his postman father and towards literature by virtue of the family’s residence in the local, where his mother was the caretaker. After the death of his father in 1911, Christopher Grieve turned to journalism. He served in the Royal Army Medical Corps from 1915 to 1920 and then returned to journalism as the editor of the Montrose Review.
Over the next few years he began to write and publish books and poetry, to the extent that he began to become seriously noted. Although he also wrote poetry in English, much of his best work is written in Lallans. `A Drunk Man Looks at the Thistle’ (1926) is an epic critique of imposed `Scottish’ culture, with its `twee' pretensions contrasted to the reality of social deprivation. MacDiarmid’s objection was against a subtle yet powerful form of cultural imperialism and inevitably he opted for a political route to express this, becoming attracted to Communism but imposing on it his own very Scottish gloss.
He was a founding member of the Scottish National Party in 1928, but was expelled in 1933 for his committed communism, already expressed openly in the first of his `Hymns to Lenin’, which appeared in 1931 and was greatrly influential upon up-and-coming poets and sometime Communist such as Stephen Spender and others. Yet MacDiarmid found himself also expelled from the Communist Party after four years. Needless to say, MacDiarmid was a cantankerous personality, as well as a gifted one!
MacDiarmid was first noted in MI5 files in 1931, when his name was mentioned by a group of Communist journalists meeting in a social setting at a Fleet Street pub and reported by an informant. Soon after, an MI5 informant reported a speech by MacDiarmid in which he said Scotland "did not end at the Cheviots but that Lancashire was its rightful boundary". Quite how the reportage of juicy items such as this helped the British Empire remains quite elusive!
He formally joined the Communist Party in London in the summer of 1934 but increasingly found himself at odds with the Party’s leadership, since he was drawn to John MacLean's earlier position of an independent Scottish Workers Republic. His poem, 'John MacLean (1879-1923)' had been first published in September 1933. By the time MacDiarmid came to write 'Red Scotland' in April 1935, he was in full agreement with MacLean.
He was taken to task by the supremely honest Peter Kerrigan, a man of enormous integrity but a firm disciplinarian. In the Daily Worker of 25th November 1935, Kerrigan differed with MacDiarmid’s opinion that an imperialist war could lay the basis for a separate Scottish revolution. He also called on MacDiarmid to dissociate from the `social credit’ economic and taxation redistribution theories of Major C H Douglas with which he was enamoured.
In June 1936 the Scottish Party’s Secretariat began a correspondence of more than twenty letters to MacDiarmid over the next three years. But he persistently avoided meeting the leadership of these issues. (His residence in the Shetlands (from 1933 to 1942) hardly assisted in this.) MacDiarmid’s four-page pamphlet, `Scotland; and the Question of a Popular Front Against Fascism and War’, argued publicly for an independent Scotland.

The sentences that the Communist Party took most exception to led to his expulsion: “The betrayal of John MacLean's line by the Communist Party of Great Britain has resulted in a loss to Scottish Socialism beyond all reckoning. Even William Gallagher, MP, who was primarily responsible for it, admits this in his autobiography, Revolt on the Clyde.'
MacDiarmid was expelled by the unanimous decision of the Scottish District Committee and informed by letter in November 1936. In March 1937, he appealed against his expulsion and received a conciliatory reply from the party centre in London. MacDiarmid was re-admitted to the party by the Appeals Commission during the Congress in May. In return for re-admission he was asked to submit the manuscript of any book that might touch on Party policy to the District leadership for consideration.

But, in June 1938, the first issue of his `The Voice of Scotland’ appeared, MacDiarmid had, by this act, made it clear that nothing that he wrote would be subject to Communist Party discipline.
MacDiarmid continued to produce significant literary work and, almost two decades later, on 20 February 1957 he was informed by Gordon McLennan, then Scottish Secretary, that the Scottish Committee of the Party had decided unanimously to support his re-admission, he accepted and remained a member until his death, even standing in a parliamentary election for the Party.
Nothing about MacDiarmid was ever muted and the background to his becoming a Communist parliamentary candidate was no exception! This position arose out of the election to the Tory Party leadership of Sir Alec Douglas-Home, at a time when the Conservative Party held a majority in Parliament and formed the government. He had been a peer and was required to resign from the Lords and stand in a by-election in November 1963 so as to obtain a Commons seat from which to become Prime Minister. The then exceedingly Tory constituency of Kinross and West Perthshire was vacated for him.
Christopher Grieve was outraged not only at the deference and adherence to archaic ways that all this implied. He was driven especially by the supine attitude of the BBC towards Douglas-Home’s `emergence’ as Tory leader and his effective `coronation’ as Prime Minister – in a Scottish seat at that - to seek legal redress.
In a celebrated case (Grieve v Douglas-Home), he challenged the election, seeking it declared void by virtue of a breach of Section 63 of the Representation of the People Act, in that due balance had not been given to all candidates in the by-election. The long-term result was the care that broadcasters make to at least mention the names of all candidates in all elections covered by them.
Home went on to lead the Tory Party in the subsequent general election but his image, not aided by Grieve’s challenge, was a factor in the defeat of the Tories and the forming of a Labour government by Harold Wilson, who milked the evident disenchantment with the old school tie image of the Tories for all it was worth. Home was replaced in the first ever formal election of Tory by Ted Heath. MacDiarmid, as Christopher Grieve, stood in the Kinross seat in that general election as a Communist Party candidate, a hopeless but endearingly brave endeavour.
In all, MacDiarmid published over thirty books and his collected works run to 1,500 pages He live in Biggar from 1951 until his death on September 9th 1978; he was buried in Langholm, where a memorial sculpture now stands.
Sources: BBC Scotland; National Archives; John Manson `Cencrastus’ CHNN, No 12 Spring 2002; http://www.slainte.org.uk
Source:
http://www.grahamstevenson.me.uk/index.php?option=com_content&view=article&id=365:hugh-macdiarmid-christopher-grieve&catid=13:m&Itemid=114
Posted by nickglais on 6/28/2014 05:31:00 AM

You are attacking Galloway because he is not a Scottish nationalist, nor a Welsh nationalist. Despite the fact that he is a Social Democrat, and BA is a revolutionary communist, Galloway has the right line as regards Scotland and Wales.

Nice to see Post Maoists in RCPUSA have found a friend in George Galloway - you should send him Avakian's works.

Has Galloway respects the British Monarch I am sure he will like wise respect your monarch Bob Avakian.