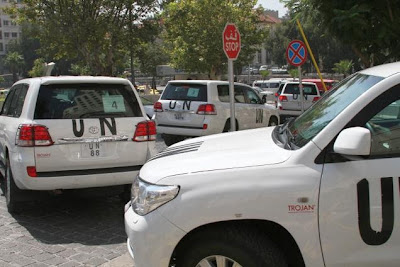 WASHINGTON, Aug 27 2013 (IPS) - After initially insisting that Syria give United Nations investigators unimpeded access to the site of an alleged nerve gas attack, the administration of President Barack Obama reversed its position on Sunday and tried unsuccessfully to get the U.N. to call off its investigation.

The administration’s reversal, which came within hours of the deal reached between Syria and the U.N., was reported by the Wall Street Journal Monday and effectively confirmed by a State Department spokesperson later that day.

In his press appearance Monday, Secretary of State John Kerry, who intervened with U.N. Secretary-General Ban Ki-Moon to call off the investigation, dismissed the U.N. investigation as coming too late to obtain valid evidence on the attack that Syrian opposition sources claimed killed as many 1,300 people.

Kerry asserted Monday that he had warned Syrian Foreign Minister Moallem last Thursday that Syria had to give the U.N. team immediate access to the site and stop the shelling there, which he said was “systematically destroying evidence”. He called the Syria-U.N. deal to allow investigators unrestricted access “too late to be credible”.

After the deal was announced on Sunday, however, Kerry pushed Ban in a phone call to call off the investigation completely.

The Wall Street Journal reported the pressure on Ban without mentioning Kerry by name. It said unnamed “U.S. officials” had told the secretary-general that it was “no longer safe for the inspectors to remain in Syria and that their mission was pointless.”

But Ban, who has generally been regarded as a pliable instrument of U.S. policy, refused to withdraw the U.N. team and instead “stood firm on principle”, the Journal reported. He was said to have ordered the U.N. inspectors to “continue their work”.

The Journal said “U.S. officials” also told the secretary-general that the United States “didn’t think the inspectors would be able to collect viable evidence due to the passage of time and damage from subsequent shelling.”

The State Department spokesperson, Marie Harf, confirmed to reporters that Kerry had spoken with Ban over the weekend. She also confirmed the gist of the U.S. position on the investigation. “We believe that it’s been too long and there’s been too much destruction of the area for the investigation to be credible,” she said.

That claim echoed a statement by an unnamed “senior official” to the Washington Post Sunday that the evidence had been “significantly corrupted” by the regime’s shelling of the area.

“[W]e don’t at this point have confidence that the U.N. can conduct a credible inquiry into what happened,” said Harf, “We are concerned that the Syrian regime will use this as a delay tactic to continue shelling and destroying evidence in the area.”

Harf did not explain, however, how the Syrian agreement to a ceasefire and unimpeded access to the area of the alleged chemical weapons attack could represent a continuation in “shelling and destroying evidence”.

Despite the U.S. effort to portray the Syrian government policy as one of “delay”, the formal request from the United Nations for access to the site did not go to the Syrian government until Angela Kane, U.N. High Representative for Disarmament Affairs, arrived in Damascus on Saturday, as Ban’s spokesman, Farhan Haq, conceded in a briefing in New York Tuesday.

Syrian Foreign Minister Walid al-Muallem said in a press conference Tuesday that Syria had not been asked by the United Nations for access to the East Ghouta area until Kane presented it on Saturday. Syria agreed to provide access and to a ceasefire the following day.

Haq sharply disagreed with the argument made by Kerry and the State Department that it was too late to obtain evidence of the nature of the Aug. 21 incident.

“Sarin can be detected for up to months after its use,” he said.

Specialists on chemical weapons also suggested in interviews with IPS that the U.N. investigating team, under a highly regarded Swedish specialist Ake Sellstom and including several experts borrowed from the Organisation for the Prevention of Chemical Weapons, should be able to either confirm or disprove the charge of an attack with nerve or another chemical weapon within a matter of days.

Ralph Trapp, a consultant on proliferation of chemical and biological weapons, said he was “reasonably confident” that the U.N. team could clarify what had happened.

“They can definitely answer the question [of] whether there was a chemical attack, and they can tell which chemical was used,” he said, by collecting samples from blood, urine and hair of victims. There was even “some chance” of finding chemical residue from ammunition pieces or craters where they landed.

Trapp said it would take “several days” to complete an analysis.
Steve Johnson, who runs a programme in chemical, biological and radiological weapons forensics at Cranfield University in the United Kingdom, said that by the end of the week the U.N. might be able to answer whether “people died of a nerve agent.”

Johnson said the team, if pushed, could produce “some kind of view” on that issue within 24 to 48 hours.

Dan Kastesza, a 20-year veteran of the U.S. Army Chemical Corps and a former adviser to the White House on chemical and biological weapons proliferation, told IPS the team will not be looking for traces of the nerve gas sarin in blood samples but rather chemicals produced when sarin degrades.

But Kastesza said that once samples arrive at laboratories, specialists could make a determination “in a day or two” about whether a nerve agent or other chemical weapons had been used.'

The real reason for the Obama administration’s hostility toward the U.N. investigation appears to be the fear that the Syrian government’s decision to allow the team access to the area indicates that it knows that U.N. investigators will not find evidence of a nerve gas attack.


In both cases, the administration had made up its mind to go to war and wanted no information that could contradict that policy to arise.
Posted by nickglais on 8/27/2013 11:59:00 PM

Democracy is hardly simple, given that the momentary will of the people can be distinguished in at least some cases from what is in the people’s own best interest. Part of the job of an elected representative is discerning or judging under which of the two a given vote should be based. Adding to the complexity are the additional judgments concerning how much weight to give campaign contributors and lobbyists who have a vested interest in the vote. All this certainly applied to the decision on whether the U.S. should use limited missile strikes against the Syrian government as a means of enforcing the international norm and treaty banning chemical weapons. Such decisions should neither be made to satisfy the immediate passions of the people nor on the behest of defense contractors. That is to say, neither mob-rule nor the military-industrial complex should eclipse the best interest of the people.