Civil societies and NGOs : The Imperialist components by Saba Navalan 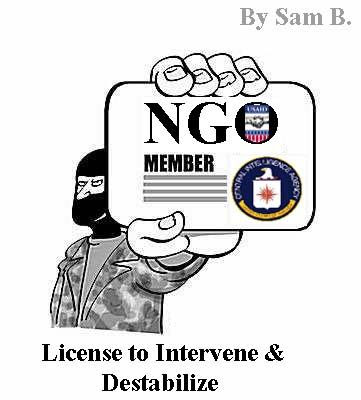 The imperative need of Imperialism in the present time to support the myriad of multinational corporate, that in turn ensure the survival of capitalism which is undergoing a structural crisis is imminent.  Even though the current expansion of the American empire in the Middle East and Asia is facing numerous stumble blocks, they have temporarily succeeded to implement their imperialist agents of change in those countries. 65 Non-Governmental Organisations in Libya for instance, through their so-called community based organisations, had been hard at work to shape the world’s public opinion against the Gaddafi’s regime. The one country in the world that had never been dependant on IMF was completely destroyed and the ‘democracy’ has been established for corporates’ exploitation.

The concept of civil society first emerged to dismantle the socialist camp such as Soviet Russia and later the east European countries. For several decades   this concept of civil society was used to guide and absorb the so called ‘anti-communist’ activists before it was then experimented in the developing countries in order to destroy the anti-imperialist, nationalist, democratic and revolutionary forces. Today it serves to implement neo-liberal social and economic structure  throughout the world.

As Professor  Ernest Gellner explains in his book on civil society , ‘the current usage of civil society rose to prominence as a direct reaction to the Marxist-Leninist structure that prevailed in the soviet union and Eastern Europe’.(1994) American empire and its western allies massively funded and created these civil societies in order dismantle Soviet supported countries such as Poland, Hungary and   Czechoslovakia. Marcia A. Weigle; Jim Butterfield  acknowledging  in their article ‘Civil Society in Reforming Communist Regimes’  as follows;  ‘In Poland, Hungary, and Czechoslovakia, the foundations of an independent civil society were built on the basis of social initiative from below designed to empower society in the face of Communist domination over state policies’. ‘The collapse of communist regime in Eastern Europe was thus considered to be process of redeveloping Civil Society.(Cahalan -1994) ‘The paradigm of civil society now became the dominant model to explain the 1989  anti-Communist revolution in eastern and central Europe. (Casier 1992)‘ Movement towards the civil society helped bringing  down regimes in Eastern Europe’(Bozoki and Sukosd 1993).

A simple concept like civil society helped to shape the entire world on behalf of imperialist countries and its corporate capitalists. Nevertheless regardless of any opinion on these countries and politics that they used to hold their power, imperialism was threatened by the existence of these countries. In order to include these countries in the American empires boundaries, at the same time exploit and destroy its resources and people. Civil societies acted as direct imperialist component until 1990s. Since late 1980’s and 1990s, the same concept of civil society is being used to destroy the 3rd world countries on behalf of neo-liberal economic structure. In the 3rd world the imperialist ruling class has always been funded and supported by western institutions and corporates.

Since 1990, with experience gathered in Soviet and Eastern Europe, civil society mechanism is being used to control the poor countries. Civil societies are interchangeably linked with NGOs which are global political and pro-imperialist actors operating rural and urban areas in Asia, Africa and the other exploited countries and dependent on the funding from Europe, the US and multi-national corporates. Neo-liberal economy and globalisation terror assault on workers, peasants, students and the other small national productive forces generates great discontent which could be starting point of a anti-imperialist class and national revolution.

In this context, the NGOs and the concept of civil society are applied to divert the discontent from the direct attack on the corporate and the neo-liberal system. In Nepal the NGOs have successfully  destroyed and divided  a revolutionary movement and create an exploitative environment. In Sri-Lanka these civil societies and NGOs helped the government to eliminate all the resistance forces before 2009 genocide. The resistant itself has been taken by the western funded NGOs, right groups and related civil societies. People’s resistance  has gradually been eliminated and corporate land grab and exploitation is now ‘peacefully’ taking place. The civil societies and NGOs want ‘peaceful development’  in 3rd world countries. The rhetoric of development in these countries as used in neo-liberal vocabulary represents implementing the infrastructure for  corporates, the exploitation and theft.  Civil societies serves as a transitional force in order to mobilize  the various level of public fractions and infiltrate into social, cultural, political, economic and environmental realms. However the basic ideology of the civil society  is to promote the class compromise.

The contemporary civil societies are made out of profoundly divided classes. Civil societies obscure class divisions, class oppression and class struggle.   Former left movement leaders, leaders of some trade unions, intellectuals and democratic forces have been co-opted by these NGOs and civil societies for unimaginable wages which is the imperialist bribe to their local agents who are mostly paid in several thousand dollars, ten to twenty  times more than a national average wage.

Civil societies and NGOs emerge in the  absence of organised revolutionary movements in third world countries. The temporary revolutionary leadership gap has to be urgently filled to resist the NGOs and class based mass movements must be organised to substitute the civil societies.
Posted by nickglais on 8/30/2012 11:24:00 AM