Report with Photographs of the Protest at Italian Embassy in London protesting the trial of 12 members of (n)PCI, CARC and APS 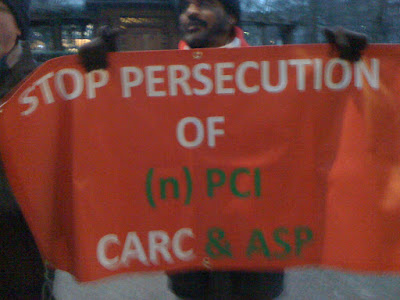 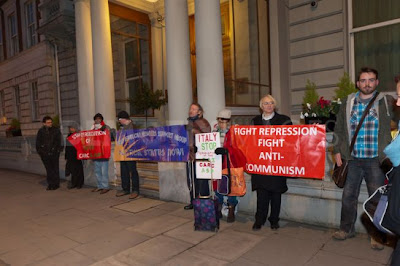 A Report and Professional Photographs  here:

We the undersigned formally protest against the persecution that part of the Italian magistracy carries out against the dissent, the freedom of expression and association.

These magistrates continuously utilize clearly political crimes, introduced in italian order by fascism, as that of subversive association, against Communist political organisations (i.e. the trial against the (new) Italian Communist Party and the Party of the Committees to Support the Resistance - for Communism).

The attempt to use the scarecrow of "terrorism" for these attacks on Communists and on people who protest makes us remember the times when Mussolini and those who supported him firstly outlawed Communists and then eliminated every party and the Parliament itself ; when the fascists were calling the Partisans (most of whom were Communists) "bandits" who fought to free Italy from Nazi-fascism.

The many judiciary inquiries against (n)PCI, CARC Party, the Association for Proletarian Solidarity and their sympathizers and helpmates are a clear violation of any democratic principle. They are an attempt to outlaw Communism, which is now clear.

I therefore send this letter to protest and to reaffirm my indignation and my concern for the reactionary and persecutory work attacking the very fundamental principles of the Italian Constitution concerning freedom of political association and organisation being carried out today in the city of Bologna with the trial of members of the (n) PCI, CARC Party and Association for Proletarian Solidarity.