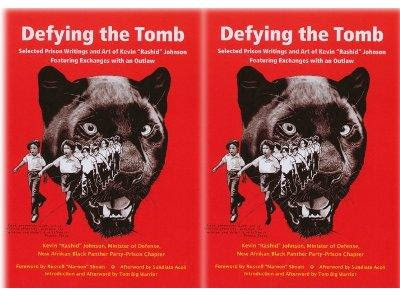 Kevin “Rashid” Johnson’s book has some calling him “this generation’s George Jackson,” the Black Panther and “Soledad Brother” assassinated in prison in 1971. Johnson, like Jackson, became a revolutionary behind bars, where he has spent over a decade in solitary confinement. Johnson presents “a powerful commentary on the failure of that which poses as political leadership in our world today” and of “revolutionary transformation while inside” the tomb of incarceration.

“Johnson’s is a powerful commentary on the failure of that which poses as political leadership in our world today.”

Earlier this year when we received word of an attempt by Maryland prison officials to ban the recently published book by former Black Panther Party leader and current political prisoner Marshall “Eddie” Conway, we were reminded of the immediacy of the threat ideas can represent to established order. It was a reminder that only specific forms of incarceration and the impact of that incarceration are acceptable for mass consumption. Prison rape, assassination, criminal organization and all kinds of violence waged by and against guards is somewhat acceptable. Even escapes. Everyone routed for Clint Eastwood in Escape from Alcatraz just as we all did for Tim Robbins in Shawshank Redemption. But one aspect of incarceration we are certainly discouraged from truly considering and engaging is revolutionary shifts in consciousness that, through implementation, threaten not only the order imposed on prisoners but that imposed on all of us.

Defying the Tomb, last year’s published book of essays and letters from Kevin “Rashid” Johnson, is another example of the kinds of revolutionary change some undergo while locked up in this country’s prisons, or what Lawrence Bobo calls “internal colonies.” Unlike Conway’s once-banned book, Johnson’s is not the tale of one previously politicized and incarcerated for that political development and action. Johnson’s is one of revolutionary transformation while inside. It describes the particular response some have to imprisonment – both in and out of jail. It describes one man’s – actually, several men’s – grappling with revolutionary concepts, the very ones so many of us who are nominally free consider immature, passé. But in what world do we live where ideas of revolutionary nationalism, historical and dialectical and materialism, anti-colonialism, socialism, communism and violence have no relevance? What utopia have we achieved with the more acceptable and safe discussions of democracy, free-market, pluralism, or indeed, post-racialism?

“In what world do we live where ideas of revolutionary nationalism, historical and dialectical and materialism, anti-colonialism, socialism, communism and violence have no relevance?”

In fact, as Johnson describes, the truly oppressive nature of this society creates a tendency to rebel against insufficient change. And this tendency took hold of him – as it does with many of us – long before becoming consciously revolutionary. The endless cavalcade of euphemisms used to deny the on-the-ground reality did little to prevent Johnson from almost immediately rebelling against the disorganized nature of anti-police sentiment, or as he says, “I’ve always been in something of a running battle with the establishment.” But the threat Johnson represents, a threat that has led so many familiar with him to call him this generation’s George Jackson, is the threat of organizing around an ever-increasingly radical and well-studied analysis of this society. The threat Johnson represents, one that has had him held in solitary confinement for well over a decade, is his unyielding willingness to continue, as he writes, “… studying, refining my views, and testing them in practice.”

Johnson represents a necessary resurgence of deep study, deep commitment to the people and the depth of radical ideas. His is a powerful commentary on the failure of that which poses as political leadership in our world today and the value of the suppressed ideas that, while unpopular, are still correct. After all, it is not simply the similarity in analysis or the fact that the book contains letters written between brothers, comrades striving to improve their ideas and organize around them that begs the comparison to George Jackson; it is the continuity of conditions or the permanency of the relationship held by Black people to the state and the state’s relationship to the world. Johnson’s book, its argumentation, its conclusions, even his artwork are further reminders of the incomplete revolution and the failure of our most popular “leadership” to advance what, as Tom Big Warrior writes in the book’s foreword, is the coming “revolutionary situation… not because of the actions of the Left [but] in spite of the Left’s inaction and decline.”

Defying the Tomb defies more than the incarceration of one man. It defies popular illogic concerning the conditions of the people and what they must do about them. It is a programmatic ideological blueprint for us all.

For Black Agenda Radio I’m Jared Ball. On the web go to BlackAgendaReport.com.

Dr. Jared A. Ball is an associate professor of communication studies at Morgan State University in Baltimore and is the author of I Mix What I Like! A Mixtape Manifesto (AK Press). He can be found online at: IMIXWHATILIKE.COM.

VIDEO ON THE ART AND WRITINGS OF KEVIN "RASHID" JOHNSON