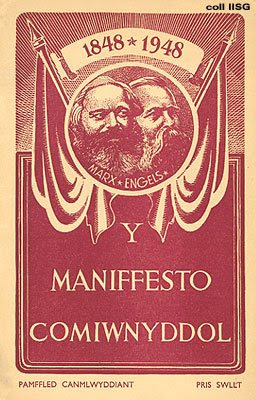 I met Arthur Evans many years ago in the mid 1960's at Colletts Bookshop in Charing Cross Road in London when he gave me copies of a paper that he edited called Vanguard which had been published by the newly formed Committee to Defeat Revisionism, for Communist Unity.


I only met with him a few times, but was impressed by his knowledge of Marxism and he related to me in detail the struggle against revisionism in the Communist Party of The United States between Earl Browder and W.Z Foster in which he had participated has a member of the CPUSA branch in the San Fernando Valley in California.


My memory of Arthur Evans was stimulated by the publication on the internet of some of his writings by the Marxist Internet Archive - here is the introduction to his writings by Michael McCreery who founded with Arthur Evans the first anti revisionist organisation in Britain in the 1960's.

Truth Will Out – Against Modern Revisionism

A Collection of Letters which passed between Arthur Evans and the leadership of the C.P.G.B. between 1947 and 1953.

All those within the working class movement in Britain who are awakening to the need to fight, not only the open class enemy but also those within our ranks who have succumbed, for whatever reason, to capitalist ideas and capitalist arguments, can learn much from these letters of Arthur Evans.

“In the struggle against what enemies within the working class movement did Bolshevism grow up and become strong and steeled?” Lenin asked this question in Left-Wing Communism. Our immediate need today is to grasp the truth contained within this statement. These letters of Arthur Evans teach us that all Marxists, all those with a consistent working class understanding, must unite to smash opportunism and purge the movement of capitalist ideas, must unite to re-educate where possible and to expel where necessary.

These letters were written over a number of years, during a series of sharp engagements with opportunism in many different fields. This is not polished writing but polemical writing. Evans is worrying away at the truth. He will not compromise in his analysis. He recognises that Marxism is a science; that statements must be tested by examination of the facts. Again and again during these years he differed with the leaders of the Communist Party of Great Britain on vital issues, matters of life and death to us all. “Am I not right? Is it not so?” he asked them again and again; and the facts proved him right, and the facts were ignored, shuffled to one side, fudged over. Not one word of this correspondence was allowed to appear in the C.P.G.B’s press. Sometimes when the Communist Party of Soviet Union revised its opinion the leadership of the C.P.G.B. made grudging amendment of earlier statements, but always without admitting clearly that they had been wrong, that there were those in the Party who had been right, and without any attempt to analyse why they had gone wrong.

Why is this? Why has there been, over the last twenty years and more, a persistent and largely successful attempt on the part of leading Communists to suppress Marxist ideas within the C.P.G.B., conceal the truth from the cadres on basic theoretical and practical questions? Because these leading Communists, whose names are mentioned in this correspondence (and most of them remain in the leadership today), have been making a persistent attempt to mislead the most militant workers, who join the C.P.G.B. because it purports to stand for the socialist alternative to capitalism. These leading Communists have, over the years, persistently confused and distorted the answer to the key question of how to win Socialism. This problem was solved, in its essentials, by Marx and Engels in the last century, and the correctness of their analysis has been confirmed in every subsequent socialist revolution. The prime need, Marx and Engels explained, is to smash capitalist state power, to establish the dictatorship of the proletariat. The capitalist state cannot be captured and transformed; it must be smashed. For this the working class must counterpose their own organisations to the organisations of the capitalist state, their own power to capitalist state power. Lenin expressed this universal truth in these words: “The proletarian revolution is impossible without the forcible destruction of the bourgeois state machine and the substitute for it of a new one which, in the words of Engels, is ’no longer a state in the proper sense of the word’.”

But, as all who have read the British Road to Socialism know, the C.P.G.B. is committed in its programme to the belief that it is possible to transform the capitalist state, that a “Socialist Government” can be elected which will legislate for socialism, achieve a legal revolution. This idea has nothing in common with Marxism. It is social-democratic, bourgeois in content. It can only be contained in a programme which purports to be Communist by ruthlessly suppressing the advancement of Marxist ideas among the cadres, by keeping them in ignorance of what Marx actually said, and what Marxists today throughout the world are saying; and, where that is impossible, by blatant distortion and misrepresentation of Marxist arguments and attempts to discredit those who advance them.

The leadership of the Communist Party of Great Britain has betrayed Marxism. It has, in reality, abandoned the struggle for socialism, and reduced the aim of the Communist Party to that of advancement of the condition of the working class and working people within the framework of imperialism. They have turned the Party into a radical appendage of the Labour Party, a ginger-group whose role is to prod the existing Labour movement into more radical actions. These actions may well in themselves be welcome. But to reduce Communist aims to this is to betray the fundamental interests of the working class. There can be no permanent gains for working people under capitalism; the fundamental interests of the working class, and working people as a whole, demand an end to the anarchy of capitalist production and the exploitation of man by man.

But whereas Arthur Evans’ voice was silenced in the past, today this is no longer possible. Those who pay lip-service to the achievements of the Soviet Union in order to suppress the revolutionary energies of the British working class still lead the C.P.G.B. But the truth is breaking through. They stand condemned as renegades. As such they must be utterly discredited. Now that the firm general line of advance fought for by Lenin, Stalin, and the C.P.S.U. over many hard years has given place to Khrushchov’s general line of opportunism and betrayal, the British leadership lines up internationally with its kin throughout the world. The mask has been dropped. The open fight has begun. Gollan, Khrushchov and company must be defeated in Britain, in the U.S.S.R. and throughout the world, for they represent a policy of collaboration with imperialism. The defence of Marxism-Leninism is being led, internationally, by Mao Tse-tung and the Communist Party of China.

We salute Arthur Evans for his moral courage in battling on during years when he found little response within the working class movement. That time has now passed. Others have joined him in this hard struggle to extirpate opportunism from our ranks, win the working class for Marxist leadership, and advance to smash imperialism, in unity with the workers and peasants of all lands. No matter how long and how hard the struggle, we shall win.