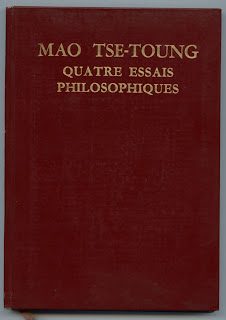 Mao’s writings on philosophy are directed to educating the Party cadre and masses in Marxism-Leninism so as to change the mode of thinking and practice. Mao himself was an ardent student of philosophy. When he got hold of books on philosophy he would consume them in intense concentrated reading. Because of the earlier influence of the dogmatists who had returned after study in Russia and could not relate their knowledge to reality, Mao was continuously eager to make the Party’s study and teaching linked to practice. He wanted to make Marxist philosophy and particularly the Marxist dialectical method of use to all Party cadre and activists and to the common masses.

The Theory of Knowledge: Of prime importance was Mao’s teaching on the theory of knowledge. An important work was his essay On Practice – On the Relation Between Knowledge and Practice, Between Knowing and Doing. Though it took only two hours of lectures, Mao said it had taken weeks to write. The central point, which Mao explains is that knowledge does not drop from the skies, it comes from social practice and from it alone. True knowledge, or correct ideas, come from three kinds of social practice – the struggle for production, the class struggle and scientific experiment.

Theory depends on practice. It is unthinkable, said Mao, that it should not be measured and checked by practice. In turn, theory changes practice, changes our method of work and thinking. Through this is brought about the transformation and gaining of more knowledge. No one is born wise, or born stupid. Knowledge cannot come before material experience; nobody can become an expert before practically doing a thing.

Mao explained the process of obtaining knowledge. It starts from perceptual knowledge, the stage of sense perceptions and impressions, where man at first sees only the separate aspects, the external relations of things. As social practice continues, things that give rise to man’s sense perceptions and impressions in the course of his practice are repeated many times; then a sudden change (leap) takes place in the brain in the process of understanding, and concepts are formed. Concepts are no longer the phenomena, the separate aspects and the external relations of things; they grasp the essence, the totality and the internal relations of things. Between concepts and sense perceptions there is not only a quantitative but also a qualitative difference. Conceptual or logical or rational knowledge is a higher stage than the stage of perceptual knowledge.

On Contradictions: The other important contribution of Mao to Marxist philosophy was in dialectics and particularly relating to the understanding and application of contradictions. The understanding and use of contradictions appears at various points and almost throughout Mao’s analysis and writings. His main work is On Contradictions, which is an essay on philosophy written in August 1937 by Mao after his essay “On Practice” and with the same object of overcoming the serious error of dogmatist thinking to be found in the Party at the time. Originally this essay was presented as two lectures at the Anti-Japanese Military and Political College in Yenan.

These ‘explanations and development’ was done some twenty years later by Mao. Mao work was a leap in the understanding of contradictions. He examined the question of contradictions in great detail and clarified them in such a manner as to make them easily understandable and easily useable by anybody.
Firstly he asserted that the law of the unity of opposites, is the fundamental law of nature and of society and therefore also the fundamental law of thought.

Following from this he explained the principle of the universality and absoluteness of contradiction. According to this principle, contradiction is present in all processes of every object and of every thought and exists in all these processes from beginning to end.

Next he gives the principle of the particularity and relativity of contradiction. According to this principle, each contradiction and each of its aspects have their respective characteristics.

A very important concept given by Mao in this respect is regarding the unity and struggle between the opposites in a contradiction. Mao points out the unity or identity of opposites is conditional; it is thus always temporary and relative. On the other hand the struggle of opposites is unending; it is universal and absolute.

Lastly Mao clarified regarding the question of antagonism in a contradiction. According to Mao antagonism is one form, but not the only form, of the struggle of opposites; the formula of antagonism therefore cannot be arbitrarily applied everywhere. Some contradictions are characterised by open antagonism, others are not.

I only have one question. How do you explain the problem of talent. I agree that no one is born wise or stupid.

my dear some people are born genius and some people are artificial genius. but wherever talent is concerned talent is something related with man's in born mental capabilities plus man's own knowledge, environment in which he/she grow up and hardship. means all are born equal except lunatics, the things on which talent is based are the environment in which one lives, one's love for knowledge and the opportunity to to do something in your desired and relevant field. e.g a good cricketer can never be a good politician or a business man