Mao on The Party 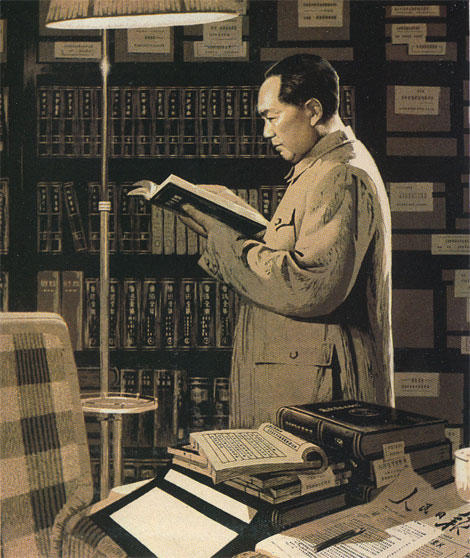 From the time that Mao took over the leadership of the CPC he made all efforts to develope the Party on true Leninist lines. Due to the domination of the earlier incorrect lines, particularly the third ‘Left’ Line of Wang Ming there were many deviations in party functioning. Due to the sectarian understanding there were no proper norms of democratic centralist functioning and a totally wrong approach to the two line struggle. Decisions were taken without consultation and without involving the Party cadre and by manipulating the holding of plenums and other meetings.

Two line struggle was not conducted openly and representatives of another point of view were harassed and punished. Also due to dogmatism there was no implementation of mass line. Mao made all attempts to rectify these deviations as well as build up proper forums and bodies. In the process Mao also clarified and developed many organisational concepts. He also tried to correct certain wrong understanding that had grown in the international communist movement and also in the CPSU under the leadership of Stalin.

This view of Mao was based on his understanding that centralism meant first of all the centralisation of correct ideas. For this to take it was necessary for all comrades to express their views and opinions and not keep it bottled up inside them. This would only be possible if there was the fullest possible democracy where comrades would feel free to state what they want to say and even vent their anger. Therefore without democracy it would be impossible to sum up experience correctly. Without democracy, without ideas coming from the masses, it is impossible to formulate good lines, principles, policies or methods. However with proletarian democracy it was possible to achieve unity of understanding, of policy, plan, command and action on the basis of concentrating of correct ideas. This is unity through centralism.

Mao did not restrict the understanding of democratic centralism only to party functioning. He broadened the understanding to the question of running the proletarian state and building the socialist economy. Mao felt that, without democratic centralism, the dictatorship of the proletariat could not be consolidated. Without broad democracy for the people, it was impossible for the dictatorship of the proletariat to be consolidated or for political power to be stable. Without democracy, without arousing the masses and without supervision by the masses, it would be impossible to exercise effective dictatorship over the reactionaries and bad elements or to remould them effectively. Mao was making these observations after the rise of modern revisionism in the Soviet Union and saw that the masses had not been mobilised to exercise the dictatorship of the proletariat. He also saw the rise of revisionist tendencies within the CPC at the highest levels and recognised that the only safeguard against such trends was the initiative and vigilance of the lower level cadre and the masses.

Thus Mao said in his talk in January 1962, “Unless we fully promote people’s democracy and inner-Party democracy and unless we fully implement proletarian democracy, it will be impossible for China to have true proletarian centralism. Without a high degree of democracy it is impossible to have a high degree of centralism and without a high degree of centralism it is impossible to establish a socialist economy. And what will happen to our country if we fail to establish a socialist economy? It will turn into a revisionist state, indeed a bourgeois state, and the dictatorship of the proletariat will turn into a dictatorship of the bourgeoisie, and a reactionary, fascist dictatorship at that. This is a question, which very much deserves our vigilance, and I hope our comrades will give it a good deal of thought.”

The Two-Line Struggle is another aspect of party organisational principles, regarding which Mao developed Marxist understanding and theory. Mao’s approach, based on dialectical materialism was to see incorrect opinions within the Communist Party as the reflection of alien classes in society. Thus as long as the class struggle continued in society there was bound to be its reflection in the ideological struggle within the Party. His approach towards these contradictions too was different. He saw them as non-antagonistic contradictions initially which through ‘serious struggle’ we should try to rectify. We should give ample opportunity to rectify and only if the people committing errors ‘persist’ or ‘aggravate them’, then there was the possibility of the contradiction becoming antagonistic.

This was a correction of Stalin’s understanding, which he had presented in Foundations of Leninism. Stalin was opposed to any attempt to rectify wrong trends through inner-party struggle. He called such attempts as a “theory of ‘defeating’ opportunist elements by ideological struggle within the Party”, which according to him was “a rotten and dangerous theory, which threatens to condemn the Party to paralysis and chronic infirmity”. Such a presentation refused to accept the possibility of a non-antagonistic contradiction and treated the struggle against opportunism as an antagonistic contradiction from the very beginning.

Drawing lessons from the same historical experience, Mao presented the methods of inner-Party struggle in the following manner. “All leading members of the Party must promote inner-Party democracy and let people speak out. What are the limits? One is that Party discipline must be observed, the minority being subordinate to the majority and the entire membership to the Central Committee. Another limit is that no secret faction must be organised. We are not afraid of open opponents, we are only afraid of secret opponents. Such people do not speak the truth to your face, what they say is only lies and deceit. They don’t express their real intention. As long as a person doesn’t violate discipline and doesn’t engage in secret factional activities, we should allow him to speak out and shouldn’t punish him if he says wrong things. If people say wrong things, they can be criticised, but we should convince them with reason. What if they are still not convinced? As long as they abide by the resolutions and the decisions taken by the majority, the minority can reserve their opinions.”

Mass-Line: Another area where Mao advanced Marxism was regarding Mass-Line. Starting from the basic Marxist-Leninist understanding of the party maintaining the closest possible links with the masses, Mao developed the concept of mass-line to a qualitatively new level. At the philosophical level he showed how it was an essential aspect of the Marxist theory of knowledge. At the political and organisational levels, he showed how it was the basis of a correct political line and also how it was the essential organisational line of inner-party relations.

Mao explains that in the practical work of the Party, all correct leadership is necessarily ‘from the masses, to the masses’. This means: take the ideas of the masses (scattered and unsystematic ideas) and concentrate them (through study turn them into concentrated and systematic ideas), then go to the masses and propagate and explain these ideas until the masses embrace them as their own, hold fast to them and translate them into action, and test the correctness of these ideas in such action. Then once again concentrate ideas from the masses and once again go to the masses so that the ideas are persevered in carried through. And so on, over and over again in an endless spiral, with the ideas becoming more correct, more vital and richer each time. This, as Mao says, is the Marxist theory of knowledge.

In order to bring into practice the principle ‘from the masses, to the masses’, Mao explains that it is necessary to have a correct relationship between the leading group and the masses in an organisation or in a struggle. It is necessary that the party draws together the activists to form a nucleus of leadership and links this nucleus of leadership closely with the masses. If this is not done the leadership of the party becomes bureaucratic and divorced from the masses. It is also necessary that the leadership does not remain content with merely giving general calls. General calls must be followed up by particular and concrete guidance if they are to be properly implemented. “Take the ideas of the masses and concentrate them, then go to the masses, persevere in the ideas and carry them through, so as to form correct ideas of leadership—such is the basic method of leadership.” In this way Mao explains the mass-line as the basic method of leadership of the Party over the masses.

saleGreat precis of Mao's thinking on the Party. It has reminded me of necessary argumentsand actually informed me of what I had realised before.

Good article. Necessity of two line struggle and real understanding of democratic centralism are very important in fighting wrong leaderships in most of the parties today. When quoting, please mention the name of the work so that the authenticity could be shown to some others also.
Prasad