Celebrations of 42nd anniversary of the Communist Party of the Philippines 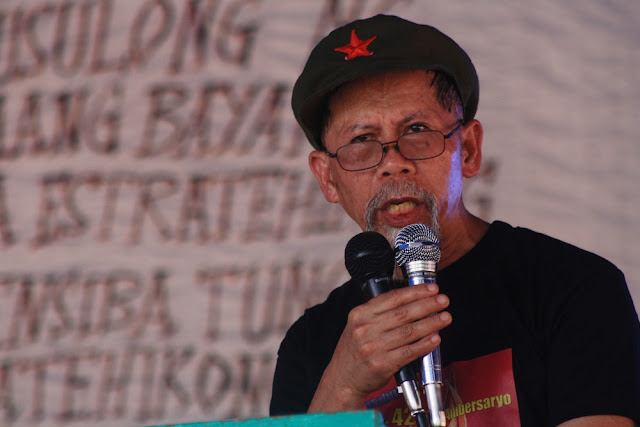 Several thousand people joined celebrations yesterday of the 42nd founding anniversary of the Communist Party of the Philippines (CPP) in a what was described as "one of the biggest celebrations of the revolutionary victories of the Filipino people exhibiting the continuing growth of the revolutionary movement led by the CPP."
At the same time, the CPP denounced the Armed Forces of the Philippines (AFP) and Philippine National Police (PNP) "for setting-up checkpoints along the route to the site of the assembly to harass participants and dissuade them from proceeding to the site of the celebrations in violation of the spirit and intent of the 19-day ceasefire."
The whole day celebration was hosted by the National Democratic Front-Mindanao.
According to NDF-Mindanao spokesperson Jorge "Ka Oris" Madlos, a few more thousand people failed to join the celebrations because of the checkpoints setup by the military and police. "Checkpoints were setup by the 4th Infantry Division all over the Caraga region in a desperate attempt by the AFP to prevent the people from joining the celebrations of the CPP anniversary."
At around eight in the morning, traffic built up to around two kilometers along the main highway leading to San Agustin town, Surigao del Sur, as military and police operatives blocked scores of vehicles carrying participants. According to Ka Oris: "The military and police unreasonably blocked the people's free movement insisting on listing all the license numbers of vehicles, asking for registration papers and checking the license of drivers."
The military and police checkpoints only relented when reporters and cameramen from local and international media outfits arrived and witnessed the harassments.
"The attempts to stop people from joining the celebrations of the CPP violated the spirit and intent of the simultaneous ceasefire which, among others, aim at allowing personnel of both sides to be with their families and friends to hold celebrations during the holidays," added Ka Oris.
"Despite the harassments, the celebrations pushed through and was carried out successfully," added Ka Oris. Thousands of peasants and lumad people, fisherfolk, as well as workers and students from town centers joined a company of New People's Army (NPA) Red fighters in a field surrounded by coconut trees and rice paddies. "This shows the deep and widespread support of the people for the Communist Party and the revolutionary movement."
The occasion also served as an opportunity for Red fighters to be joined by their families.
According to the CPP, scores of other smaller assemblies were carried out in guerrilla fronts all over the country, as well as in factories, schools, offices, private homes and communities in cities and town centers.